Every year, The Rays the Mark Foundation reviews the careers and lives of individuals who have dedicated themselves to serving the greater good. Our Annual Honoree is selected based on a spectrum of criteria, ranging from personal adversity and professional accomplishments to charitable contributions, community involvement, and many other factors.

Read more about this year’s Rays The Mark Foundation Honoree, Lauren Cochran Scoville, and the many contributions she has made to help better the lives of those around her.

Lauren Cochran Scoville has been working in public transportation for over a decade and has had an impressive career centered on transit innovation across roles in mass transit agencies, strategic research firms, and technology manufacturing companies like Proterra.

During her tenure at Foothill Transit, Lauren co-led the implementation of 100% battery-electric heavy-duty city buses, the first commercial deployment of modern, purpose-built electric transit buses in North America. During her time as a researcher at the Texas Transportation Institute, she partnered with the Texas DOT to launch the first automated and connected vehicle proving ground transportation for public transit.

In 2015, she was recruited by Houston METRO and experienced leading mass transit operations in one of the largest and most complex urban regions in North America. In her role as Director, Lauren oversaw METRO’s contracted operations, and then moved into the Director of Innovation role, a natural fit given her track record with new technology research and implementation. As Director, she led the agency’s Office of Innovation, and she was honored by METRO during Women’s History Month for her transit service. Since 2017 Lauren has worked at Proterra where she now serves as the Vice President of Sales for Proterra Transit, helping transit agencies throughout North America make the transition to zero-emission vehicle technology.

Lauren was diagnosed with breast cancer in April 2022. She was diagnosed with stage 2 invasive ductal carcinoma, the most common form of breast cancer, and is currently undergoing treatment at MD Anderson in Houston, Texas. She is going through chemotherapy, surgery, and potentially radiation, which not only has a physical impact but also has a financial impact. Despite these challenges, Lauren has had an incredible attitude, remaining committed to advancing public transit and bringing ZEB technology to our communities, and being a continuous source of inspiration and positive energy for the entire Proterra team. People who work with Lauren know her as a radiant, smart, positive person with contagious energy and a true passion for buses. I cannot think of a better person to honor with support from Rays the Mark Foundation. 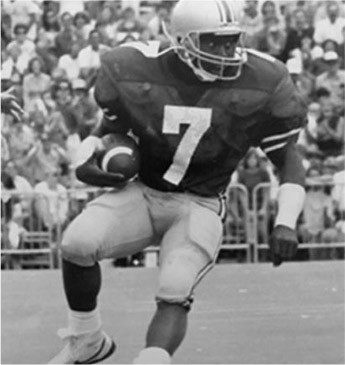 The Rays the Mark Foundation embraces people who have had a positive impact on society, who through their kindness, passion, and purposefulness, ‘raise the mark’ and make the world a more powerful place.

The foundation is committed to honoring those that have honored the world when they need it the most.

The 2022 Rays the Mark Foundation honoree is Sonny Gordon. Sonny is a natural-born leader, leading by example through dedication, and with respect and gratitude always on display.

At an early age, Sonny began leading a life of excellence, earning himself a defensive back position with the Ohio State University (OSU) Buckeyes from 1983 - 1986. As a natural born leader, it was no surprise that during his senior year, Sonny rose to become the team Captain leading the Buckeyes to the Cotton Bowl championship.

Following his time at OSU, Sonny was drafted to the NFL by the Cincinnati Bengals and went on to play for the Tampa Bay Buccaneers. Sonny rounded out his career on the field in the CFL with the Hamilton Tiger-Cats and Saskatchewan Roughriders.

Just this year, Sonny was diagnosed with Amyotrophic Lateral Sclerosis (ALS). ALS is a progressive neurological disease where the nerve cells that connect your brain to your muscles (motor neurons) lose function and die resulting in progressive weakness. The diagnosis was a shock to Sonny and his family, but in true Sonny fashion, he has approached this battle with relentless drive and positivity to fight this battle as hard as he could.

Sonny has without doubt always been there for us, and now it is our time to show up and be there for him and his family. These funds will help support the Gordon family as they continue their battle with ALS.

Do you know someone who deserves consideration for selection among the 2023 Rays the Mark Foundation Honorees? Click here and let us know more about them, what sets their efforts apart, and the best way for one of our board members to get in touch.

1/2 price Appetizer just for Signing up!
AND Get a FREE Sundae on your Birthday!

Please send me my coupon today!

NO THANKS, I PREFER TO KEEP BROWSING